GEM detector readout system for transmission measurements at the VESUVIO instrument at ISIS.

Neutron spallation sources require always new instruments in order to improve the quality of their experiments. In this framework, the capability to accurately measure total neutron cross sections at the VESUVIO instrument at the ISIS Facility can be boosted by a tailored transmission detector. For this reason, the first double ceramic thick GEM detector has been realised. Detectors 2 based on GEM technology are largely explored thanks to their characteristics, such as good spatial resolution (< 0.5 mm), good detection efficiency, high rate capability (MHz/mm2) and coverage area of some meters at low costs. Nuclear Instruments collaborated with Milano Bicocca University, CNR and ISIS, UK to the realisation of a GEM detector made of a 10B4C cathode, two ceramic thick GEM foils and a padded anode and then the characterisation on the VESUVIO beam line, where stability, γ-sensitivity, imaging capability and sample analysis have been studied. The successful results confirm that the ceramic thick GEM detector is a good device for the thermal and epithermal neutron detection and it will allow the scientific user community of the instrument to perform better quality transmission measurements so as to determine more accurate total neutron cross section of condensed-matter systems.

Left: Schematic layout of the detector, with a summary of distances between elements. Right: A gold ceramic thick GEM foil.

The ceramic double thick GEM (THGEM) detector described in this paper is composed of a boroncoated cathode, two ceramic THGEM foils and an anode, made of 384 pads; the entire system is put in a Ar/CO2 70%/30% gas mixture. As shown in fig.1, the first component is a 200 um thick Aluminium cathode, coated with 1.2 m of 10B4C 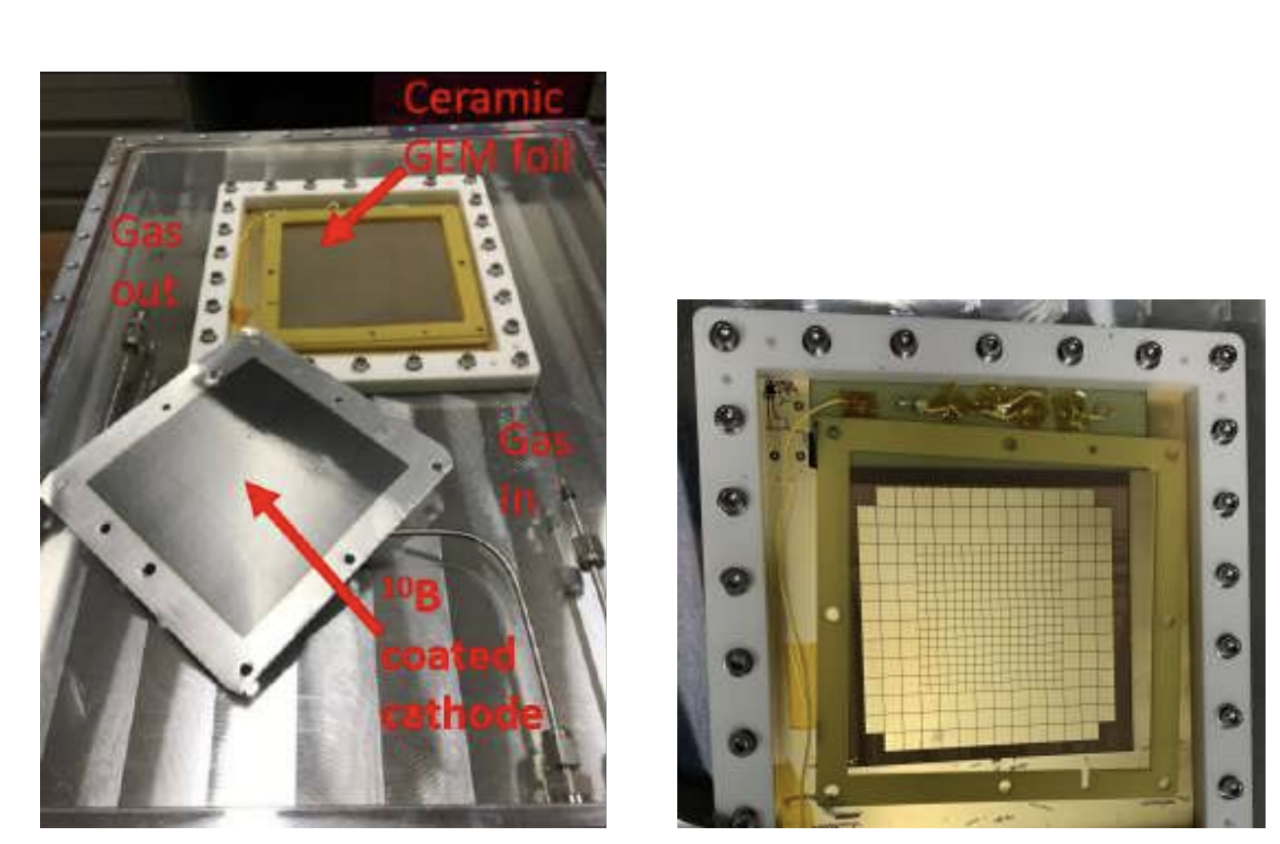 After the two THGEM foils, an anode is located and it is composed of 384 pads with different dimensions (256 3×3 mm2 inner pads and 128 6×6 mm2 87 outer pads). The output signal from the anode is processed by GEMINI ASICs [13], a custom electronic readout developed for GEM detectors. Each ASIC has 16 detecting channels and each channel has a Charge Sensitive Preamplifier (CSP) and a Discriminator. The discriminator threshold can be set separately for all channels, thus constituting a significant improvement respect to the previous CARIOCA-based readout , where thresholds may be set in groups of 8 channels only. GEMINI ASICs can operate in both Time over Threshold (ToT) and Time of Arrival (ToA) mode at the same time. In the present application, where the use of the neutron Time Of Flight (ToF) technique was envisaged, the ToA mode has been used. The detector has been designed so that the electronic readout is located outside the neutron beam, as shown in figure in order to reduce the back scattered neutron component, the activation of the materials and the soft error probability. The Data Acquisition (DAQ) System is completed by custom FPGA board to store the raw data and to process data in real-time without overload the system. The data  are eventually loaded via a fast (up to 400 Mevents/s) optical fiber system to a remote Linux server.

The readout system designed by Nuclear Instruments is composed of a series of distributed readout boards, each equipped with a Kintex7 FPGA capable of implementing 64 TDCs with a resolution of 0.5 ns, double hit resolution of 4ns and 64-bit timestamps. Each FPGA is interfaced with 4 GEMINI ASICs which implement the analog front end and the comparator.
The FPGAs are read via a 10 GBIT fiber optic link connected in Daesy Chain by a server equipped via a custom 8x gen3 PCIE card, designed to read Gemini chips.

Readout electronics assembled on the rear part of the detector
Gemini 64-D readout card
Detector, installed on Vesuvio, ISIS, UK
Web interface for monitoring and data reconstruction. It is possible to see the beam and the characteristic time of flight of the neutrons selected by the Vesuvio chopper
Image of a sample containing water, from which the spatial resolution of the detector can be estimated
Previous
Next