FROM ENERGY SPECTRUM TO THE ANALOG OUTPUT SIGNAL

The main feature of this instrument is its ability to generate an analog signal which follows the programmed physical characteristics with a statistical time and energy distribution. This means that the analog signal is not a recording, but it is real-time generated.

Thanks to the real-time data generation, the Digital Detector Emulator is able to reproduce physical phenomena like the Poisson time distribution, energy spectrum, correlation of signals between the two output channels and several noise sources. The instrument emulates the pile-up effect and the drift of the baseline value in time following a programmable generic profile. Sources of white and 1/f noise and generic disturbances can be emulated. Furthermore, the output signal has a rising time of less than 1 ns. The emulator is also able to generate correlated pulses with a fine digital control of the relative occurrence time of 1 ns resolution.

WHAT THERE'S INSIDE - HARDWARE

The main feature of DT5810 is the extremely high speed of the DACs used (1 Gsps) and wide bandwidth of the analog front-end, allowing the generation of analog pulses with up to 1 ns rise time.

Figure shows the structure of the hardware: all the emulation process is performed by the Kintex 7 FPGA. Two 16bit 1GSPS DAC converts the digital output signal of the FPGA in a analog signal. Two different Analog Output Path are available on the instrument: one optimized for speed (1ns rise time, 4Vpp) the other optimized for the amplitude of the signal (30ns rise time, 18Vpp).

WHAT THERE'S INSIDE - FIRMWARE

The emulation algorithm generates pseudo-random events according to the input statistical distributions of energy spectrum, time distribution, and pulse shape.
The input energy spectrum is used to simulate the pulse amplitude, while the input time distribution to simulate the time distance between two consecutive pulses, and the pulse shape to choose among different shapes. The output signal statistically reproduces the input energy and time spectra.
The system can be controlled from the user PC by a software tool that allows to program the whole system in few clicks. An on-board FPGA performs up to billions of operations per second, generating a digital stream that is then converted to an analog signal by two 16-bit 1 GSPS ADC (DT5810).
The analog signal can be provided on the output w/o a filter to get low noise or sharp rise time.
The system owns 128 MB RAM memory to store either predefined function sequences or the AWG waveform samples (see later).
The signal shape can be generated either by a digital equivalent integrator circuit, or by a set of 16 memories. The first algorithm allows the generation of exponential signals (adjustable rise/decay time) with no limitation in the number of piled-up events.
The second one allows the generation of arbitrary programmable shapes up to 16 events in pile-up.
The FPGA generates the time based trigger signal that enables the signal generation as a function of the programmed time distribution. It is also possible to emulate two different shapes with programmable mixture on the same output channel.
This feature allows to test the pulse shape discrimination. While the integrator circuit emulates the behavior of a real analog pulse, the memory-based system emulates the pile-up effect starting the readout of one of the 16 memories as soon as the trigger fires.
The output of all 16 memories is then summed to produce a piled-up signal.
The signal can be combined with the noise to have a more realistic emulation.
The system is able to emulate white noise, 1/f noise, and random walk. It is also possible to mix those noise sources, as well as to add the interferences among the events. The 1/f noise can be adjusted both in frequency and in amplitude.
It is also possible to emulate the periodic noise due, for example, to the switching power supply with either fixed or random amplitude and time jitter.
The system emulates the drift in time of the baseline value following a programmable generic profile. Through an interpolation function, it is possible to achieve long lasting drifts up to 1 s. 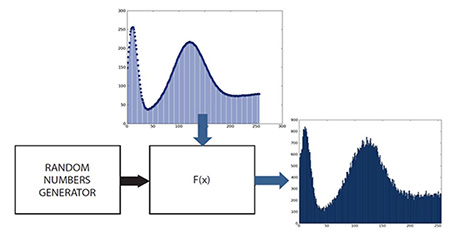 In emulating a radioactive source, a primary task is to generate the energy values following a user-defined energy spectrum.
The maximum flexibility is given by a PC equipped with a software that allows the user to directly draw the spectrum, and upload it to the simulator circuit.
The algorithm converts a white distribution in a digital stream of data in according with the programmed spectrum.

EMULATE ALL KIND OF DETECTORS

Emulate any kind of detector and pre-amplifier. Low noise, high linearity and high speed of the Detector Emulator allows to emulate HpGe (even with better resolution of a real detector), silicon detector (even with transistor reset preamplifier), diamonds detectors and PMTs

The instrument is able to emulate two different radiation sources at a time and to provide them either on the two outputs, or to mix them (with known mixing parameter) on the same output.
The two emulation chains can either have fully independent settings (energy spectrum, signal shape, time distribution of the events, noise characterization, etc.), or they can have some of the parameters correlated. For example, a correlated subset of the two output channels can share the same energy spectrum and the same generation time, or it is possible to have a fixed time correlation among the events of the two channels.
Moreover, it is possible to set the instrument in a master/slave configuration where the first channel works as a trigger of the second one. The correlation among the events is useful, for instance, in debugging PET systems, or in those experiments involving the time of flight measurement, or to simulate the detection of small signal events expected in a large amount of background.

Three operation modes are available:
1) Channel 1 (CH1) is the time shifted copy of Channel 2 (CH2) (12 ps step);
2) CH2 has its own statistics generator (i.e. different spectrum, different noise, etc.) but is triggered by CH1 (delayed by 12 ps step);
3) a third emulator channel (with separate statistic properties) generates correlated pulses for both CH1 and CH2. In this way, only some events of the two channels are correlated.
The delay line for the time correlation is thermalized through a Peltier cell to minimize the thermal drift.
Many applications require the acquisition of coincidence events among different channels. The Digital Detector Emulator allows to generate a subset of common events in the two channels, that shares the same energy spectrum. It is therefore possible to program the two analog outputs to emulate two uncorrelated backgrounds with only some of the events in common. Only when the readout coincidence between the two channels is enabled (for example using CAEN digitizer families with DPP firmware), the correlated spectrum comes out.

CHA and CHB generate an uncorrelated background on the two output channel. Only some pulses are generated correlated.

To debug pulse shape discrimination system the emulator is able to generate two different programmable shapes with separate programmable statistic.
There are many experiments where the discrimination among particles is made through their different waveform shape. This is, for example, the case of neutron-gamma discrimination. The Digital Detector Emulator, being able to simulate two different pulses, allows to simulate the neutron-gamma different response, in order to make tests and debug studies without the presence of the specific radioactive sources. This gives the great advantage to have a realistic emulation, limiting the use of dangerous radioactive sources.

The system allows the emulation of several noise contributions, such as white noise, 1/f, random walk (baseline drift). It is also possible to acquire from the oscilloscope a periodic interference noise and to add it to the output signal, with variable amplitude and time jitter.

The user could program predesigned sequences of pulses by defining a csv files with amplitude and time distances between pulses. The emulator is able to generate up to 500k pulses using the amplitude/time information provided by the user sequence. This feature is usefull to stress processing algorithms with a well defined signal without loosing the possibility to generate unpredicatable noise and interferences.

When the emulation process is reset, the kernels of generators are re-initialized with new random data (from a physical source) making the sequences always different. In order to obtain the same sequences of pulses, the system uses a particular random number generator that underlies the process of pseudorandom emulation of events. It is possible to re-initialize the pseudo random generators to a well known value getting always the same predictable sequence. In this sense it is possible to start the tool to obtain sequences of billions of pulses and then restart the random number generation from the same initial seed and regain the exact same sequence of data, by storing only the seed value.

Instrument software include a complete isotope database. It allows to select a set of emission line and create an arbitrary spectrum. It is possible to create a mix of several isotopes programming the relative emission rate.
It is extremely useful in educational applications because the user have a virtual full set of radiation source.

(a) Emulated spectrum (blue) measured by means of a 12-bit oscilloscope has been superposed to the spectrum (red) used to initialize the emulator.
(b) The distribution of the difference values between the two spectra is shown. The rms error is 0.028% 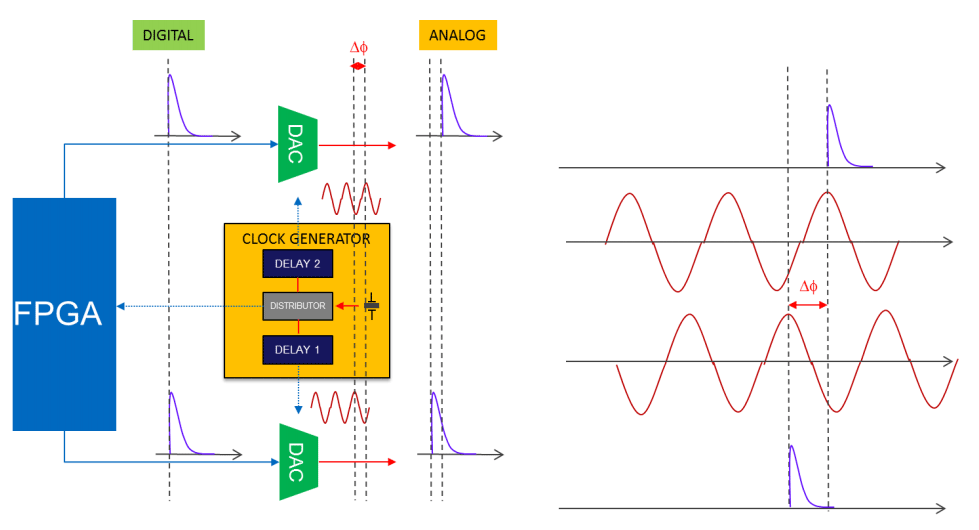 A low jitter clock generator produces a signal that is divided over three different lines by a clock distributor. One of these is used as clock of the FPGA device. The two channels are synchronized with this clock signal. The other two outputs of the distributor are sent as inputs of two integrated delay lines, between which it is possible to insert a time lag.
The lines delayed are then used respectively as the clock lines of the two DACs that are connected to the outputs of the two digital channels of the FPGA device. In this way the two channels, while being originated synchronous, are shifted by the programmed time interval.

This instrument includes a 125 MSPS 14 bit ADC that could be used for two purpose:

• Mix the analog input with the emulation output
In this configuration the result of the emulation process is mixed to the signal acquired by the ADC from the analog input. Analog input could be scaled and translated by a fixed offset.
This feature could be used to inject in the signal coming from a real detector an emulated signal with a different spectrum and time distribution.
For example, it is useful to test processing systems designed to separate a particular source from a background.

• Analyse the signal from a real detector to extract spectrum and signal shape to initialize the emulation process.
The instrument behaves like a MCA (Multi Channel Analyser): it takes the output signal of a real detector and calculate in real-time the spectrum and the waveform averaging the input signal.
The output of the MCA could be imported by one or both emulator channels to initialize the emulation process.